It was quite a shock to see my beautiful Toasty with 1/4th of him missing and stoned out of his mind. But once he got home, his head seemed to clear (although his pupils remained rather dilated) and he soon seemed his same old self again and in great spirits. He laid on the couch with me,  purring away, hopped about the room and ate all of his food with gle. He even pulled his usual stunt of pretending to be simply yawning and stretching and shoved poor Blackman off of the couch. Yeah, that’s the Toasty I know.

I am truly amazed at his resiliency. I mean I know these guys are heroic little troupers, but it is as if nothing worth note had happened, beyond this small inconvenience of missing a leg. He’s clumsy of course, and it was so hard to watch him attempt to use the litter box yet not quite seem able to settle on how to accomplish the task, but all in all, he’s just… well… Toast.

Purring while curled up to my leg on the couch, he would nod off for a moment then awaken and try to stand up with a start and look at me as if to ask “what happened?”. I may just be projecting but it was as if he’d awaken each time just to realize his leg was really gone and it wasn’t all just a bad dream.

He was so nonchalant and completely like the regular Toast, that I called the Dr to confirm it was ok he was moving around so much. She felt I should keep him semi confined so as not to injure any of her surgical work, so I kept him on the couch next to me… purring away, watching a marathon of Justified, until nearly 2 am when I finally put him on his cage for the night.

I didn’t even make him wear the “cone of shame” since he seems to have no interest or even knowledge of the stitches. Sincerely… its practically miraculous, that he could lose 1/4th of his body, sleep away from home over night for the first time in years, come home to not be able to walk correctly and be forced to live in a caged environment, completely out of his routine and yet seem perfectly at ease with everything (as well as is possible)

Perhaps the pain of the cancer eaten shoulder was so great, that everything now is simply a relief. I do not claim to know the thoughts, desires or dreams of any cat, but I like to believe he is just happy to be home. I am so grateful to have him here, it brings tears to my eyes just to write about it 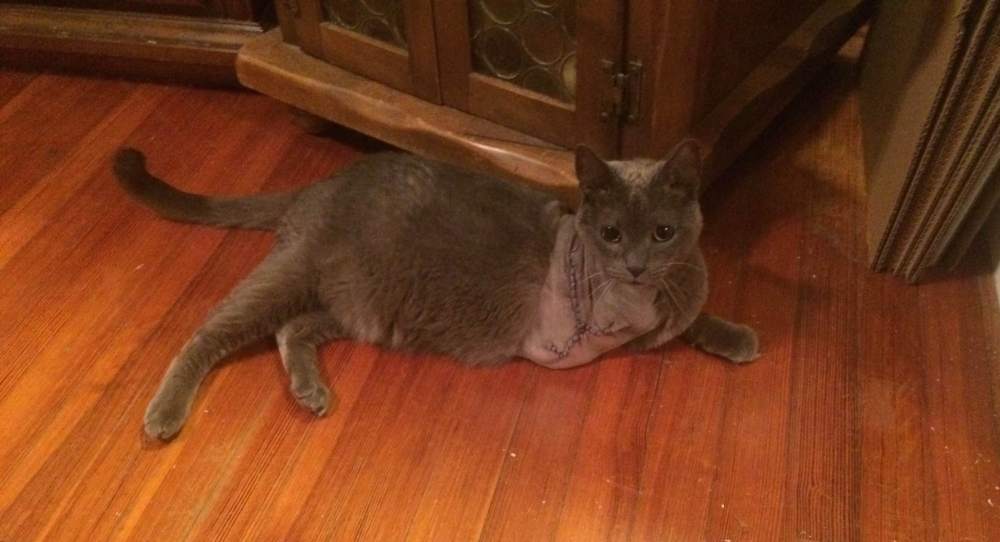